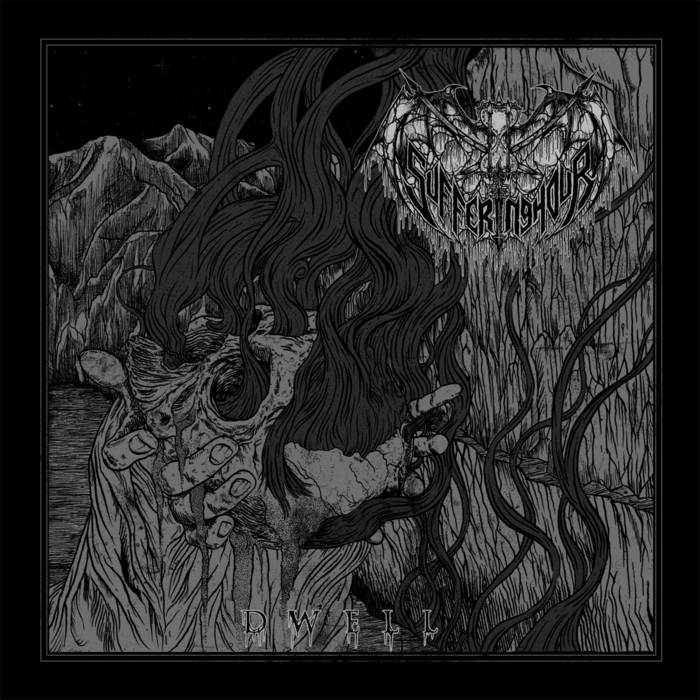 BlueTempleVisions One long 18 minute passage of glistening transmutations in the darkness. Gold-standard Blackened Death metal that reveals more and more which each return. Favorite track: Dwell.

Ippocalyptica Suffering Hour’s rather impressive debut, In Passing Ascension, should have received way more kudos than was the case, as I cannot readily recall a death metal debut album of such skill, power, and variety being released in 2017. While stalwarts such as Immolation and Nile, legendary though they are, remain content to revisit the same territory over and over (even if they do it really well), Suffering Hour is part of the new breed - think Convulsing, Abyssal, and their ilk - that is pushing death metal into new realms, even if they are admittedly all doing it through a blackened filter (as a bit of black metal always makes everything better). On Dwell, we are gifted with a perfect distillation of Suffering Hour’s sound, a twisting, adventurous take on blackened death metal that always shows us something compelling without ever forgetting the importance of the almighty riff. These gents kick a nearly immeasurable amount of ass here, and yours will be next if you do not support them. Favorite track: Dwell.

BLOOD HARVEST RECORDS (distributed & marketed by REGAIN RECORDS) is proud to present a massive new EP from SUFFERING HOUR, titled Dwell, on CD, 12" vinyl, and cassette tape formats. The vinyl version shall be one-sided, with art etching on Side B.

One of the most exciting new bands BLOOD HARVEST has had the pleasure of hearing, SUFFERING HOUR exhibit a power and maturity that exceeds their otherwise short existence. Theirs is a death metal that defies most modern paradigms, safely eluding prevailing trends whilst driving deep into the heart of timeless DEATH METAL art, evoking mysticism as surely as molten crush, songwriting class as surely as hideous chaos, with a serpentine flow like no other. They proved as much with their critically acclaimed debut album, In Passing Ascension, released by BLOOD HARVEST in 2017, and now are set to eclipse that feat with an ambitious new EP, Dwell.

A single 18-minute track, Dwell is literally a world unto itself. If SUFFERING HOUR created sonic wormholes with their debut album, then Dwell is one beyond-massive wormhole, seemingly without end. Elusively transcendent just like its full-length predecessor, Dwell sounds plucked effortlessly from the ether whilst being grounded in the dirt and grime and filth of the earth - and, surely, the foundation of death metal itself. And yet, there's a certain magisterial feeling here, a narrative flow fully developed that puts SUFFERING HOUR in a league of their own. The band's previous extremes - melodicism vs. miasma, space vs. swarm, tech vs. hypnosis, osmosis vs. disintegration, death metal as art vs. death metal as death metal - are just as relevant on Dwell as on In Passing Ascension, but the fact that the power-trio have condensed them into a single, world-eating epic track borders on the mindblowing.

Masters don't sit idly by; they march on. And upon the release of Dwell will SUFFERING HOUR hit the road for a North American tour, so the time is NOW to jump on the bandwagon or forever remain clueless.