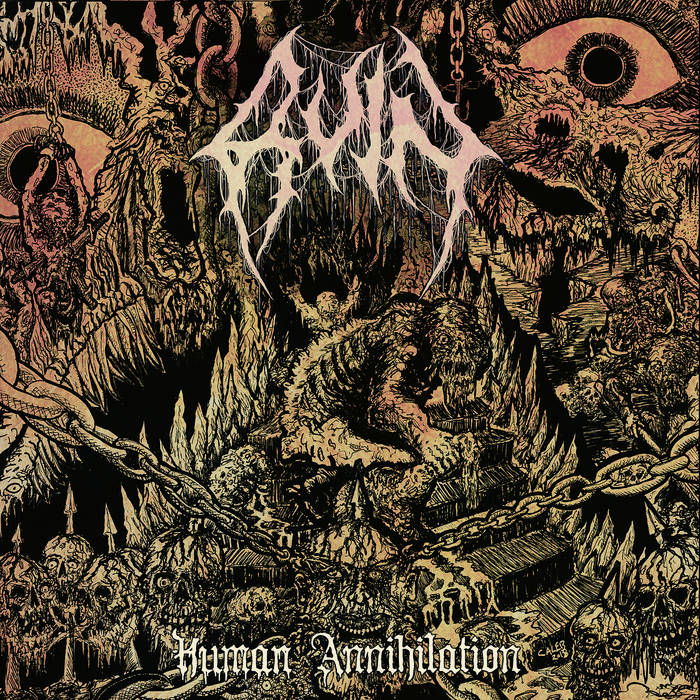 BLOOD HARVEST is proud to bring you the vinyl edition of Ruin's long-awaited second album, "Human Annihilation".
Formed back in 1991, somewhere in the United States, Ruin was disbanded at some point later that same year due to various members of the band being incarcerated and institutionalized. Now free from any obstacles, the Ruin Death Metal machine was re-started again.
Their debut album, “Drown in Blood” was released in 2017 to worldwide critical acclaim. Ruin’s “Drown in Blood” was everything that everyone had been waiting for, and then some: mean, vicious, spiteful, raucous and sickening Death Metal. Sonic debauchery is what you wanted? Sonic debauchery is what you got!
Alas, Ruin strike while the iron’s red-hot and deliver another foul cauldron of filth with “Human Annihilation”. Shit-heavy and strewn with shit, “Human Annihilation” picks up exactly where their “Drown in Blood” ended, and delivers pure and utter ugliness enriched with doomed-out passages, crusty tempos and sudden blasts that are meant to turn your stomach without care. And yet, compared to its predecessor, “Human Annihilation” goes even deeper into the creepiness; its soundfield is still vile and viscous, but there’s an even-more-pronounced lurking dread haunting their no-less-heavy ruminations. If “Drown in Blood” was some sort of bastard child spawned from Hellhammer covers being slammed out by “Realm of Chaos”-era Bolt Thrower taking place in the jam room of Finnish sickos Abhorrence in 1989, then “Human Annihilation” is the beyond-drunk and drugged-out aftermath, where there’s simply no escape from the disease-ridden basement. They say absence makes the heart grow fonder. Well, this time, Ruin weren’t gone very long for us to feel any warm feelings for them, and so they deliver the more sickening and hateful “Human Annihilation”.

Cover art by Caleb Dickenson (Cosmic Void Dark Art) and mastering by Ted Tringo, so you know this one’s gonna rot your soul with Ruin!