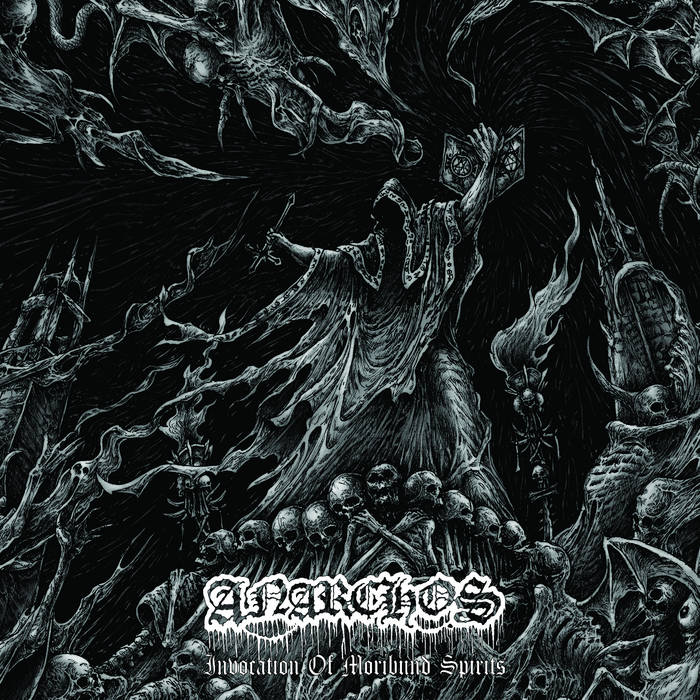 Featuring past and present members of such bands as Eternal Solstice, Burning Hatred, Ulcerate Fester, Satanic Tyrant, and Profligate, ANARCHOS play total death metal for total death metal maniacs. Neither concertedly "old school" nor "modern" whilst rejecting neither when it comes to the grand, gutted spectrum of death metal, ANARCHOS create a dense-yet-dynamic maelstrom of morbid energy. Their debut full-length, Invocation of Moribund Spirits is aptly titled: such a timeless, trend-free swell of sewage and filth sounds as rottenly fresh now as it would a decade ago or even a decade (or more) before that.

Anarchos was born in 2010 when Vincent joined forces with Ardy and Martin to create raw and obscure death metal. In the rehearsal room it turned out that the skills of the three individuals combined perfectly. The first music was written and the band was completed during the winter of 2011/2012 with Thorsten on bass and Harold on vocals.

The written songs were eternalized in one recording session of a rehearsal in the spring of 2012. This demo was raw and brutal, but did not contain the quality to release it on a true format. Nevertheless, the band wanted to engulf the world with their music, so they published the demo only digitally.

After the winter of 2013 there was a change in lineup, Harold was replace by Frank on vocals. With this lineup, it was time to enter the studio and record proper material. 5 songs were recorded at the Dirty Bird Studios for an EP release.

“Descent Into The Maelström” was released upon the world by Vic Records in february 2014 on MCD and by Murder Records in May 2014 on Tape. During 2015 Thorsten left and Frank was replaced by Frederik.

Through the years 2016 & 2017 the recordings of a full-length were made. “Invocation Of Moribund Spirits” is recorded, mixed and mastered at the Dirty Bird Studios by Fredde Kaddeth (Massive Assault, Entrapment, Burning Hatred).