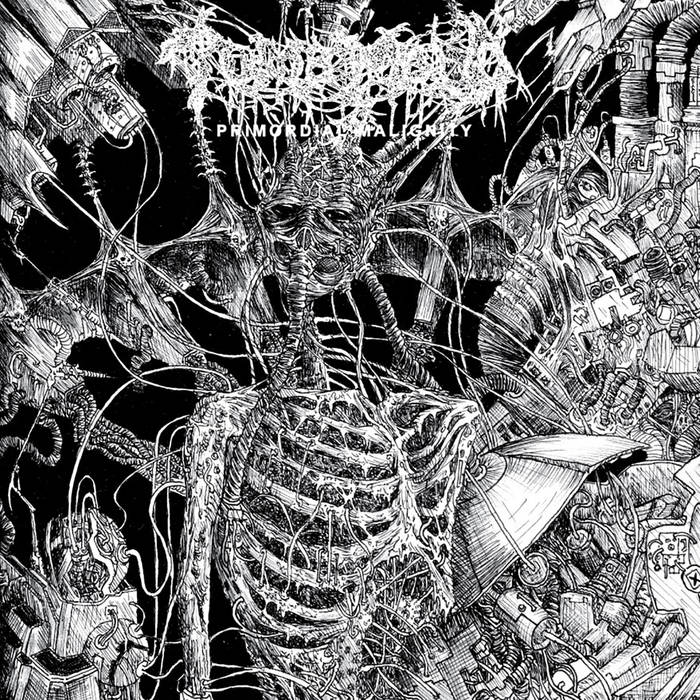 ScoopMeister The nauseating, Finndeath-adjacent riffs are absolutely the star of the show in this swirling maelstrom of filth and decay that you just can't ignore. And this was only the debut - the band has only gotten better on subsequent releases. Favorite track: Primordial Malignity.

Dethroned A stellar debut from an act that finally seems to clicking on with the Metal world. Such a raw, and brutally crushing album, from what was at the time just a duo that morphed into a fully staffed group. Consistency has proven to be key and it's an ingredient that Tomb Mold has stayed committed to throughout their music. Truly proud to own all 3 and have among my album collection. Cheers from Colorado Favorite track: Primordial Malignity.

BLOOD HARVEST RECORDS is proud to present TOMB MOLD's highly anticipated debut album, Primordial Malignity. Just last year, BLOOD HARVEST reissued the band's debut demo, The Bottomless Perdition, to widespread acclaim - and rightly so, as this four-song opening salvo displayed an exquisitely ghastly version of death metal that seemingly had been rotting in the earth for centuries. And yet, for however much that demo was something of a love letter to '90s Finnish death metal, it merely suggested the grim 'n' grandiose things to come from TOMB MOLD on their astutely titled debut full-length, Primordial Malignity.

The first thing that becomes apparent upon pushing "play" on Primordial Malignity is the production: robust, rounded, utterly crushing yet clear, and yet not sacrificing one whit of TOMB MOLD's early, eldritch filth. If anything, this sonic articulation brings further elucidation to the Canadian duo's increasingly nuanced craft, their strive for the ultimate in classic Metal of Death songwriting. For TOMB MOLD are still a duo of guitarist/bassist Derrick Vella and vocalist/drummer Max Klebanoff, who've have played together in various bands in the past and retain their intense, enduring love for death metal whilst being deeply embedded within a DIY framework. Across the eight swift tracks which comprise the 32-minute Primordial Malignity, a sense of the familiar vs. foreign is waged, that whiff of death metalled deja vu that's soon erased with a foul, fetid freshness of approach. Indeed, the duo's Finnish-isms are foul and fetid here, but are shot through with a preternaturally adept knowledge of what made such classic death metal work - and, crucially, how to expand upon it without compromising its essence. But most of all, TOMB MOLD truly make good on their moniker by crafting malodorous, malignant landscapes that bubble and boil with dread and disease, tension and terror, and finally the sweet release of DEATH.