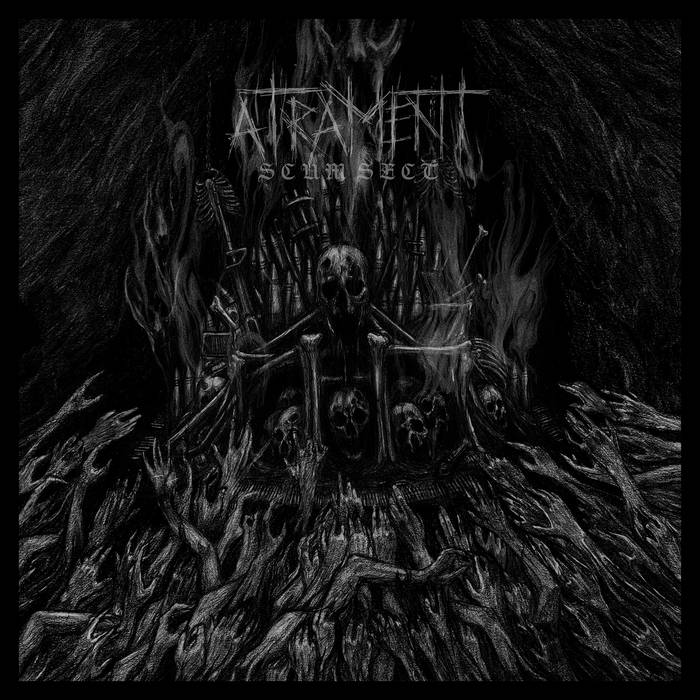 Nihilistic Bay Area D-Beat horde Atrament return with their gruesomely hostile sophomore full-length album, “Scum Sect”, a maelstrom of incredibly dark, negative, and hateful crust punk, driven by a barrage of crushing d-beat drumming, and laced with the deadliest strains of primal death metal and of the most cancerous raw black metal. With members of Vastum, Necrot, Abstracter, Mortuous, Black September, Vale, and Moral Void within its ranks, Atrament re-emerge with their most vile and malevolent music to date, spewing forth ten bludgeoning new cuts of pure concentrated sonic hostility that vastly build upon the band’s already established lethal strain of hateful metallic crust punk, and taking things to the next mindless extreme. Within the total chaos and endless destruction of these harrowing thirty minutes, the listener will face a world riddled with plague and torment that appears hopeless and torn as an utter firestorm of crashing d-beats, streamrolling riffs, and abhorrent atmospheres is unleashed upon them - the band’s pulverizing amalgamation of primal influences ranging from Doom, Discharge, Skitsystem, and Deviated Instinct, to Dismember, Darkthrone and Craft once again pushed over the edge and spiraling out of control. While the nightmarish artwork which graces the work was once gain crafted for the band by dark surrealism master Stephen Wilson, “Scum Sect”’s monstrous sound and low end crush depth was achieved once again within the walls of Earhammer Studios in Oakland CA, the famed lair of sound engineer wizard Greg Wilkinson (Vastum, Acephalix, Autopsy, Undergoing,