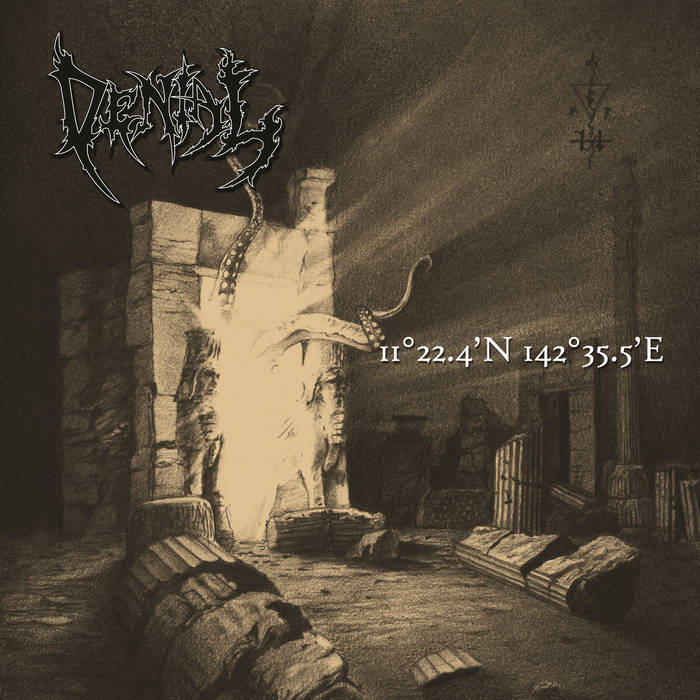 It's been six long years since Mexico's DENIAL last delivered a release - and eight since they made their BLOOD HARVEST debut - but BLOOD HARVEST RECORDS has managed to coerce two new studio tracks out of the deathcult. Entitled 11°22​.​4'N 142°35​.​5'E, this brand-new 7" proves that time has been kind to DENIAL - in fact, it never stopped at all! Their lumbering, gnarled-to-the-max rumble has never sounded fresher, simply because the uncompromising quintet were years ahead of the "morbid death metal" curve to begin with. Now, they've returned to reap and pillage at approximately 11°22​.​4'N 142°35​.​5'E - presumably, a gateway to Hell! (Nathan T. Birk)

"This Mexican band has been active for almost ten years and consists of five experienced men. Their discography already consists of an EP and a full-length album...Two evenly long songs, totaling just over 11 minutes, make up this EP. The band plays dark, atmospheric death metal with a touch of hateful anger. They’ve got a technical approach, with moderate signs of occult undertones. This is far from typical tech-death, but they do blend in some rhythmic approaches in that direction...Heavy riffs and howling guitars set the agenda, while more rapid-gunfire breaks up this progress before the band risks repetition, something they don’t seem to risk anyway, as their death metal is in constant motion...The pure death metal is really solid, but I was in doubt for a moment as to whether the technical aspect contributed to or worked against their barbarous essence. It is definitely spicing things up while also creating character, but I’m still not sure their deadly assault wouldn’t have emerged as even more profane and morally depraved without these more civilized fractions keeping their beastly temper back...Nitpicks aside, this sound killer. I’m sold. And so are you" - NoCleanSinging.com

"Where the hell does Blood Harvest find this shit? Blood Harvest definitely is in the running to be one of my favorite labels, and I virtually own nothing from this label (I got to change that)...Ok, so on to Denial...BRUTAL! They remind me of early GRAVE, morbid and organically brutal. If they ever need a new guitar player, I am selling everything and moving to Mexico (yes, they are that good)...I need a full-length now, guys. If you don't have the material written for a full-length, get on it; hopefully, you explode onto the death metal scene. People: get this, find this, buy this, support this, or just quit listening to music altogether. I'm taking a vacation form all music except Denial for the next week - I don't want to hear anything but Denial right now" - Merchantsofair.com

"This is a quite magnificent 7” slab of death from Mexico’s Denial. And not only have they produced their own piece of catacomb dwelling darkness in ‘The Involution Of Kingly Spirits,’ they’ve also covered my all-time favourite DREAM DEATH track on the B-side! Incredibly, Denial have done complete justice to ‘The Elder Race,’ as well, capturing the spirit of the song and instilling an additional cavernous blackness to the slithering riffs. Two masterful tracks of a many-tentacled madness that sound as old as eternity and twice as mysterious. Complete with some awesome cover art, this is a must-have" - Zero Tolerance [5/6 rating]

"The first thing you do is copy the coordinates into Google Maps and see where/what the hell is worthy of an EP title. Turns out, it’s the middle of the ocean! Or, the 'gateway to Hell' according to the Bandcamp page. Also, there’s this weird thing online? It’s all very, very interesting. But not as interesting as the EP itself, which is pretty interesting, too" - Metalsucks.net

"This Mexican doom/death act is quite good, which is why I wished they’d picked another name for this record. I mean no offense, but that has got to be one of the most confusing titles I’ve heard in the history of doing this kind of work. Nevertheless, it only offers two tracks and comes in at a little over ten minutes, which means that perhaps these cuts will resurface on a record with a name that people will actually be able to track down. The entire record brings forth grueling death metal with a notable about of skill and composition, meaning that you’ll get a memorable drum performance as well as solos that stand out rather well. The vocals aren’t necessarily the kind of deep growls you’d expect, but they feel closer to that of traditional death metal. 'The Involution Of Kings' follows a much faster approach, while 'The Elder Race' grooves like nobody’s business. These guys clearly haven’t set out to make all of their songs sound the same, and it’s nice to hear those thick grooves playing in time with a drummer that isn’t trying to break the world record for speed. He takes it nice and slow, which allows the track to breathe as it manifests several different incarnations with each riff change. There’s even a little bit of blues to be had. I’ve always liked more groove-laden death metal, but 'The Involution Of Kings' will appeal to those who like their doom balanced out with fierce death metal" - TheGrimTower.com

"Old-school mid-tempo death metal in the vein of BRUTALITY, RESURRECTION, and the likes, with a very heavy production and only two intricate and serpentine tracks!...First one is called 'The Involution of Kings' and has lots of short phrases. This behavior doesn’t configure a band like 'technical death metal,' but assuming that one plays death metal, he’s technical per se. All the more, this band values the old-school factor, so they’d never ape 'slam,' kiddos. They are, as I always like to say, the real deal - and you know the deal is real when you hear the second track, 'The Elder Race,' a luscious piece of old-school riffs in the vein of AUTOPSY, CIANIDE, and the likes…Sometimes, they fall into that strange relativism (I’m talking about the bands that sound like ENTOMBED), but that is just an impression, for I’m convinced if the band is old school, they always will echo ENTOMBED in a way or another...Any way the wind blows, this EP is for cultists of a time long lost" - Dark Souls United webzine

"Denial, a band from Mexico that I was unfamiliar with previously, have returned with a 7" EP consisting of two tracks, and they are mighty! This is dark Mexican death metal, all gnarly and rumbling, and it's very, very well recorded. The guitars are large and deep, and the vocals are cavernous and foul. The drums pound away like nuclear bombs, and the overall feel of the two tracks on offer is the same feel I get from old INCANTATION and IMMOLATION, with a decidedly old-school air. I will be looking further into this band and their previous full-length material since I am now hooked. One thing I was very interested in was the title of the EP, which is a latitude and longitude location. I thought perhaps it was the location of the fiction R'lyeh from H.P. Lovecraft's and August Derleth's stories, but after a search, it does not appear to be so, unless it's a location used in a story different than the one I checked. Intriguing, and hopefully, I can find out what that is at some point" - Twenty Red Nails webzine

"If you recognized the band name Denial, that's not necessarily surprising. There is at least 12 bands with that name around. We're going to Mexico City, the world's 19th largest city by population...The band has been active for almost 10 years and consists (after customary replacements) of five men with good experience. Their discography already consists of an EP and a full-length album...Two evenly long songs, totaling just over 11 minutes, make up this EP. The band plays dark, atmospheric death metal with touches of hateful anger. I thought I heard signs of occult undertones, but these were more or less replaced by a more technical approach. The band plays far from typical tech-death, but they blend in rhythmic solutions in that direction...Heavy riffs and howling guitars sets the agenda, while more rapid gunfire breaks up this progress before the band risks repetition, something they don't seem to risk anyway, as their death metal is in constant motion...The clean death metal is really solid, but I was in doubt for a moment as to whether the technical aspect contributed to their barbarous essence or whether it kept their beastly temper back. It is definitely spicing things up while also creating character, but I'm still not sure their deadly assault wouldn't emerged as even more profane and morally depraved without these more civilized fractions...No matter what the fuck, this sound so killer that I'm adding a plus to an already good impression" - Gorger.org