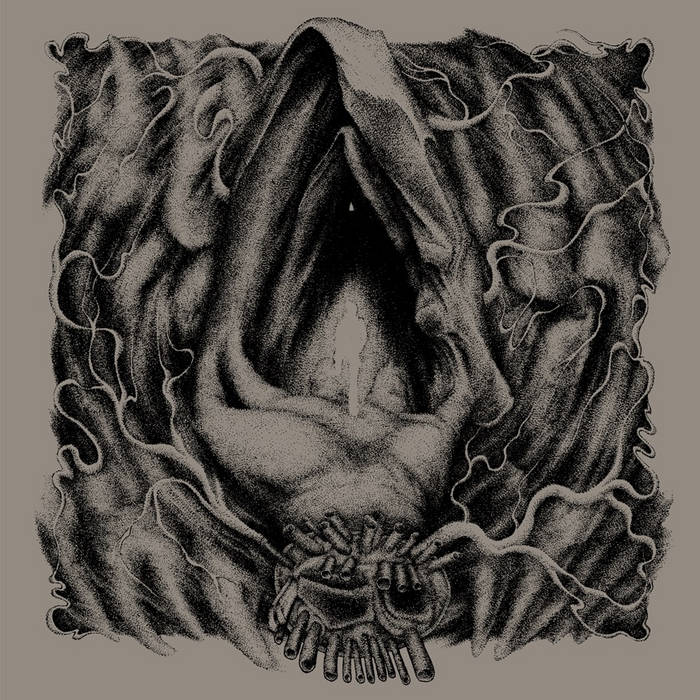 BLOOD HARVEST RECORDS proudly presents CAECUS' debut EP, Affliction, on 7" vinyl. Formed in the winter of 2013 by GM, AC, and TW, the aim of CAECUS is to create furious black/death metal with no compromise and no quarter given. The band soon yielded a handful of short, uncluttered songs, consisting of rapid-fire blastbeats, brutal-but-intricate guitar work, and cavernous, soul-devouring vocals. The lyrics across Affliction are centered around a morbid fascination with the frailty of the human condition, binding the lyrical themes with the darkness of the band's music. Across its three burly, belligerent track, the 'Affliction' EP serves as a concise opening statement of CAECUS' ongoing exploration of the macabre and unsavory. (Nathan T. Birk)

“One of the first things you notice about the music on the EP is how prominent the drumming is in the production mix, with the snare being very audible throughout. Whilst this may be a little unusual for this type of music, it works perfectly well and succinctly showcases the drummer’s pin-point accuracy. The first two tracks cover over two minutes each, but Caecus waste no time with intros, etc, instead opting to go straight for the jugular with two short, sharp forays into their music. You can hear elements of both black and death metal throughout, with a strong death metal style vocal. Their music is very tight, with tempo changes and heavy-as-fuck riffs contributing to a strong blackened death metal sound. The closing track (‘III’) is by far the longest on the EP, and coming in at almost five minutes, gives the band the opportunity to play about a little with slower tempos at the start and also mid-point when they use a brief feedback-driven break to lull us into a moment of relative calm. This calm is used to the greatest effect to plunge us back into their riff-heavy blackened death metal for a final beating from their meticulously executed music...With bands like BARSHASKETH and Caecus bringing us excellent releases this year, they’re doing an excellent job of showing us Scotland is doing its bit to contribute to the UK’s prolific output of late. This is a cracking EP and hopefully a sign of further music to come from this relatively new band”
– TheLairOfFilth.com [9/10 rating]

“Scottish full-time cavernous death metal. That’s our quick definition of Caecus after listening a few times to their opening Affliction. No space for tender melodies or intros. This effort starts directly with brutality into your hears. Harsh, groovy guitars and cavernous gutturals commanded by an impressive blastbeat drum-work that sets the pace of each one of the three songs. But you’ll also find some down-tempo bass & drums work, as in the initial moments of the second song or throughout the last track, written in general depressive ambience, ending with a dark leap into an eerie void, showing that Caecus’ compositions are not only about speed. Following in the veins of DEAD CONGREGATION but with some ARKHON INFAUSTUS sparks, the deep, frightening voice guides our souls through the dark and macabre environment of Affliction...An impressive first shout to the world” – TheBlackPlanet.org [8/10 rating]

“Caecus consists of three men with the intention of creating uncompromising furious black/death metal, supplemented with lyrics about human beings’ weak, vulnerable, and frail condition. This three-track EP is their declaration of war...The guitar resounds like industrial drilling machines in action on a major construction site where the sound is transported within the supporting walls, and echoes are thrown between bare concrete surfaces. The vocals are deep as growls, regurgitated from the colon, but jarring as the drill when it hits solid armor reinforcements. The drums, if indeed they are drums, sounds more like a jackhammer on a tin roof or a solid concrete vibrator in an empty oil tank. (And yes, there's even more bizarre examples of milk-churn abuse out there)...During these nine-and-a-half minutes, the trio makes quite a lot of uproar, but they also manage to squeeze in both aggression and gloomy moods with a whiff of disgust...It took some time to penetrate the noise and get used to the percussion, but this bodes well for, or rather it's an ominous omen of, a future in ruins” – Gorger.org

“Caecus plays a ripping, blasting form of death metal that shreds your face right off your skull. From the very start of these three tracks, the listener is pounded into oblivion. However, the pounding is done with skill, finesse, and a great dark guitar sound. In three tracks, they've made me a fan. This is dark, evil death metal with just a light tinge of black metal in the riffage. The drums remind me of an American brutal death metal band, and the riffs at time remind me of Australian black/death bands. All told, it's a real masterpiece, and I'm eagerly awaiting a full-length” – Twenty Red Nails webzine

“Grinding blackened death metal? Why the fuck not? This debut EP titled Affliction from Caecus is a furious three-track offering that will blast your face clean off your skull and leave you wanting more, all in the space of less than 10 minutes. The riffs are tortuous yet remain intelligible, utilising several techniques that make both the black and death metal genres tick. The vocals are a beastly affront to the senses and command your attention at every moment as they purvey the darkness that you desire. The element of the trio’s sound that will undoubtedly catch your attention, though, is the hyper-blast drumming. The percussion shows no relent as it mercilessly obliterates your ear drum on its path into your cranium. I’ve already listened to Affliction twice just writing this, and I’m going to dive in again. You should, too” – ToiletOvHell.com

“Affliction is the title of the debut EP by a Scottish trio named Caecus. You listen to the music, and it seems born of affliction, and it expresses affliction — among other powerful emotions. It will take you less than 10 minutes to hear the three unnamed songs on the EP from start to finish, but it’s still an all-consuming experience...If you’re like me, the first thing you’ll want to do at the end, while your head is still spinning, is go back to the beginning and launch it again so you can try to understand better what just happened to you...In a nutshell, Affliction is a dense, corrosive, breathtaking maelstrom of death metal violence. The skin-flaying riffs are coated in a thick layer of radioactive distortion and generate ravaging torrents of sound, all the better to simulate the experience of being caught unprepared in the middle of a sandstorm, or a cyclone, or maybe a pyroclastic flow...But the music isn’t just a howling storm of undifferentiated sound. The songs contain titanic pile-driving grooves, enhanced by the occasional use of stop-start rhythms. And bleak, heaving melodies surface in the midst of these malevolent assaults (along with the attention-grabbing sounds of the bass). Those grim melodies sound like the moaning of some great leviathan dragging its putrefying carcass to the graveyard of its kind...There’s one other aspect of the music that I suspect will hit most listeners right between the eyes from the very beginning — and continue hitting them until Affliction’s end: The drum attack on the EP is unusual for this style of malignant blackened death metal. It’s the kind of snare-heavy hyper-blasting that’s more commonly found in grind or certain flavors of brutal death metal — and on this EP, the drummer is completely off-the-hook in his speed and precision. It may be unusual, but I think it works really well...The longest song on this too-short EP is the last one. It backs off the intensity at the beginning, falling into a doom-laced crawl — and then the drummer goes nuts again, fueling the music with a burst of adrenaline while alien chords begin enhancing the atmosphere of otherworldly peril. In the middle of the song, the storming subsides, replaced by an extended groan of abrasive feedback — which leads to perhaps the most explosive eruption of savagery on the EP, and a finale consisting of eerie, void-faring ambient sounds...In short order, Affliction has become one of my ‘go to’ short releases of the year, especially for those times when I want metal that will blast my head clean of annoyances and worries — and every other thought — and detonate a big bolus of adrenaline in my bloodstream. Vicious stuff, and highly addictive, too. Hope you like it as much as I have” – NoCleanSinging.com

“Short, creepy, and to the point. This is how I would describe the three tracks on the debut 7” from Caecus, Affliction. Imagine a much rawer version of some of the later BEHEMOTH records, with traces if ANGELCORPSE (just without the insane solos). Brutal black/death that creeps up your spine. Three tracks titled ‘I,’ ‘II,’ and ‘III,’ all brutal and pulverizing. Definitely a strong introduction to a band that will hopefully release more material like this in the very near future” – The Dirty Room webzine

“After a few listens, you admire the genuine death-sounds and tightness of this band. This is the first time I have heard them, so it's a pleasant surprise and I feel like I hit gold! Vocally, they have the old-school death metal style with the feel of black metal. A truly convincing piece of sickness here!...Precise changes, on-point blastbeats, and sharp guitar riffing round out a classic release here. From Scotland, you are presented the sickest thing to come out of that country, and I've heard a lot of great bands from Scotland. So, take it from me on that: this is truly a buy-or-die release. Don't sleep on it!  - MerchantsOfAir.com