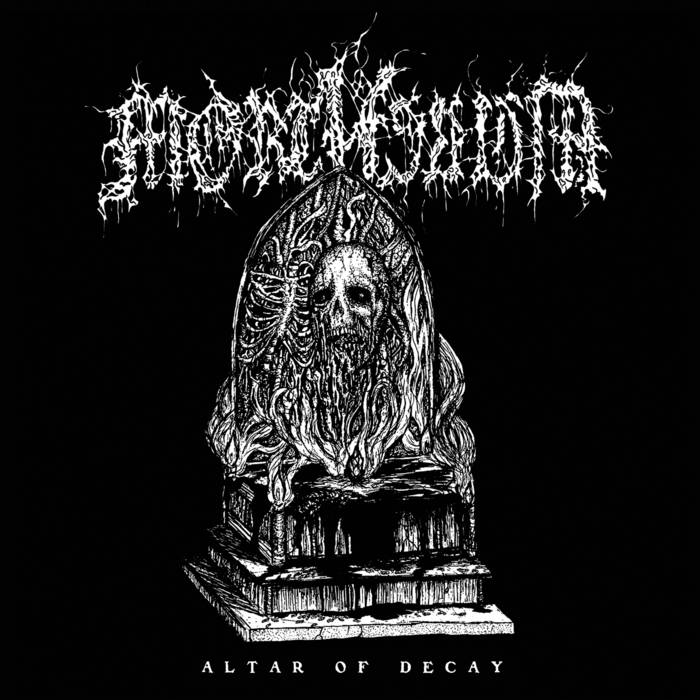 Mike K. Pacific NW represent! Love this EP so much I had to buy it twice. Favorite track: Blood Chasm.

Hailing from Olympia WA, MORTIFERUM was formed by Max Bowman (guitars, vocals), Chase Slaker (guitars), and Alex Mody (drums, vocals). Their various bands (Bone Sickness, Ēōs) had played shows together pretty regularly in the local scene as the members shared a mutual interest in Finnish and American death metal, and had a similar vision for the music they wanted to play. In 2016, after several failed attempts to get a band going, the members got together and wrote the songs that became the first demo Altar Of Decay. They enlisted the help of Dan Fried (Triumvir Foul, Anhedonist) to fill in on bass, and recorded Altar of Decay in Mody’s garage. Tracking guitars and drums live in their own space, with part-time keyboard player Ethan Camp as the engineer, MORTIFERUM were able to capture the songs in their most visceral form.

In the band’s short existence, MORTIFERUM have already had the privilege of playing with such luminaries as Asphyx, Phrenelith, Blood Incantation, Qrixkuor, Triumvir Foul, Innumerable Forms, and many more. The band have recently announced the addition of full-time bassist, Tony Wolfe, and are planning a West Coast tour with their friends in Fetid from Seattle (dates below).

Featuring Gary Bartz, 5 years of Rhythm Section Intl and an LP of the week by Nicolas Jaar