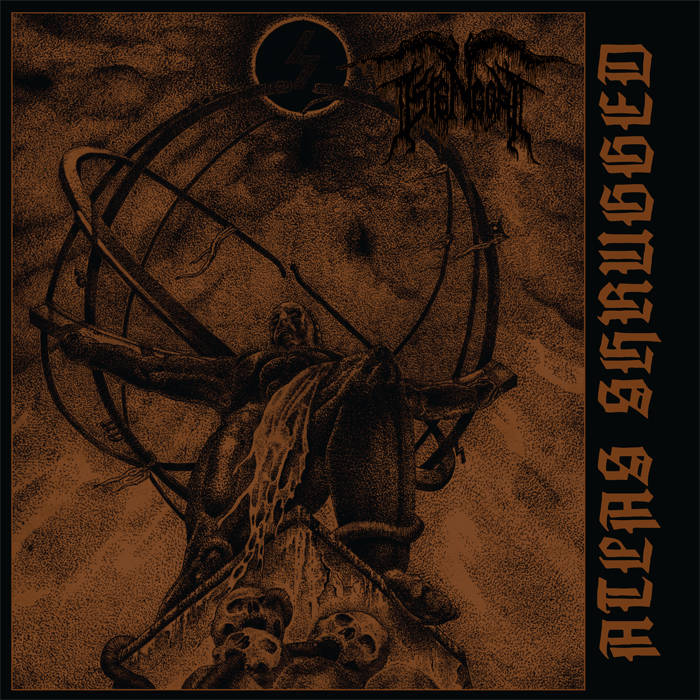 BLOOD HARVEST RECORDS is proud to present a special vinyl LP pressing of ISTENGOAT's debut album, Atlas Shrugged. Released last year on CD, Atlas Shrugged introduced ISTENGOAT to the wider international metal scene - and yet, this Chilean quartet continues to be one of death metal's best-kept secrets. Alas, BLOOD HARVEST feels it's prudent to unleash this slab of molten death metal majesty on the most supreme of all formats - vinyl - and much the label did with the 2013 vinyl release of their MMXII EP, garner ISTENGOAT the acclaim they rightfully deserve. On first listen, Atlas Shrugged can seem unassuming enough - busy, oft-complex death metal with no small amount of muscle to spare - but further listens (and there will be many) reveal an enviably lockstep ensemble who know how to use their copious chops in service of the song. Each of the eight tracks here bristle with an energy right from the off and then twist and turn every which way, with sinister hooks piling on top of each other but without overstaying their welcome, always keeping the listener guessing whilst flowing in a linear fashion. Meanwhile, Atlas Shrugged is buttressed with a production that balances barbarism and clarity, atmospheric without sacrificing the sinew. Many claimed that ISTENGOAT's last EP was, if only a bit longer, hypothetically what Morbid Angel should've done with their last "album"; here with Atlas Shrugged, hear it in full! - (Nathan T. Birk)

"Chilean death metal quartet Istengoat are getting their debut full length, ‘Atlas Shrugged’, rereleased on shiny vinyl by Blood Harvest Records, and what a hidden gem of international death metal fury it is!

Opener ‘Ascension’ goes directly for the jugular from the outset, without any sense of drama. This is instantly gratifying, without sitting through an obligatory pointless intro, Istengoat ravage your ears from the get go with their technical death metal maelstorm. ‘Der Panther’ has some great lead guitar moments, combining an American sense of brutality with a European sense of melody. Imagine Morbid Angel writing Hypocrisy songs, and you’d be close. The sleek production belies the flailing beast below.

But it is titan nine minute track ‘With Usura’ that really ticks the boxes for me. A classy melodic intro descends into a rumbling death metal beast. It isn’t easy to create good death metal these days without it being accused of plagiarism. ‘With Usura’ is monstrous in its scale, a vast crawling wall of deathly riffs. No one out there is creating death metal as challengingly simple as this.

Savagery abounds, whether it be in the Swedeath battering of ‘Unverzagt’, the morbid thunder of the title track, with its majestic brutality or the propulsive ‘Avatura’, Istengoat have injected their music with a great deal of melody, brutality and variety. There’s fast paced, razor riffing and slower, more steam roller riffs. Istengoat’s offerings to the gods of death is a mature, technically impressive album that peels back to reveal a vicious, passionate heart. This is no death by numbers, this is death metal the way it was supposed to be played." - (The Killchain / Those Once Loyal)

"This is one of the best releases I have heard this year. This is heavy, dark, relentless death metal, and oddly enough reminded me of GORGUTS' old material. Perhaps it was the occasional grunt from the singer that made the comparison for me. Not sure. Anyhow, Istengoat sounds enough like nothing else that I cannot come up with an easy analog for them. It's death metal with very strong playing and vocals, and the hooks abound on this record, making each song more memorable with each listen. This is a record that any fan of death metal would love, unless all you love is slam. But if you're into pure death metal, the old stuff, the good stuff, this is what you need. There is a very dark vibe to this record, which is helped along by the occasional black metal riff in the song structures. It bleeds the same darkness as bands like INCANTATION or IMMOLATION. This is on my must-have list for 2015, and I plan on buying it in some format very soon" - (Twenty Red Nails webzine)

"We shall remain in musical grottoes where darkness reigns, and mould and fungus thrives. We move, however, in a direction toward infected carcasses, as Chilean Istengoat (which roughly translates too God Goat) offers a more deadly sphere...The divine goat worshippers dug up just in time to witness the release of last year's début on vinyl. I missed out on it then. Thus, this re-release suits me well...These minor-key-possessed grave robbers have come a long way in the decomposition process...I basically like their dirty, worm-infested death metal well. Despite all death, the lively guitars keep the songs advancing energetically, and the beastly vocals parallel NECROS CHRISTOS in an alluring cursed course. Together, this creates a great atmosphere, fully able to hold the listeners attention alive...The album is good and dirty, with all-right songs and occasionally mighty and vigorous sections. Fans of this type of death metal should, of course, check out Istengoat and their bloodthirsty Atlas Shrugged" - (Gorger.org)

"After years of mediocre releases (the second half of the '90s – with the exception of some great bands like BEWITCHED, DOMINUS XUL, and TOTTEN KORPS among others), the Chilean scene finally got back its status of the late '80s / early '90s, with bands like UNAUSSPRECHLICHEN KULTEN, THORNAFIRE, MELEKTHAUS, DIABOLICAL MESSIAH, etc. This new decade the Chilean scene has improved in the right way, with tons of high-quality offerings, professional acts, etc. Acts like DEMONIC RAGE, PUTRID EVOCATION, Istengoat, and INVINCIBLE FORCE among others have shown the world the southernmost savagery of extreme metal...time has passed, and they have delivered some of the finest and most brutal releases the Chilean scene has faced in years. Eight hymns of mid paced death metal in the American tradition, but not as copycats, because we can find elements of their own harvest, touches of traditional Chilean old-school death metal, mainly focused on TOTTEN KORPS and DOMINUS XUL. No surprise, as the band features former members of this legendary act. Guttural vocals à la John McEntee and Ross Dolan, the band has also added some experimental touches, but not leaving its brutal trademark, which enhances this opus. Everything is blessed with a powerful and clear production courtesy of Lord Warisnake and Etagord Studios. Other influences the band has accurately managed to incorporate in their style are bands like ANGELCORPSE, (old) MORBID ANGEL, (early) VADER, and (early) DEICIDE. With this release, ISTENGOAT has demonstrated that they’re ready to conquer the world and take it into darkness" - (VoicesFromTheDarkside.de)

"As you may have guessed by now, we’ve got an affinity for goat-related things here at Nine Circles. So naturally, when Chile’s Istengoat announced the LP reissue of their 2014 debut full-length, Atlas Shrugged, coverage was imminent. Istengoat plays a brand of dirty-sounding OSDM that leans on the likes of INCANTATION and MORBID ANGEL without outright copying them. It’s tough to be totally original in the genre anymore, but the band does a good job of paying tribute to their heroes while forging their own battle ready sound...The members of Istengoat have also been in bands like CHRIST ABLAZE, BELLUM, and DOMINUS XUL, and throughout this album, influences of all their shared spaces shine through — whether black metal, death metal, or in between. Drummer C.I.R.R.’s blasts have a black metal foundation and sound, with the kicks way up front in the mix. opener 'Ascension' is a good example of this, and wastes no time getting into the groove...'Unverzagt' is another early highlight and makes the two tracks that precede it seem like foreplay. The mix of black metal speed and muddy-sounding death metal will be music to anyone’s ears, and vocalist WLTS sounds as though he’s barking with quicksand in his throat. Later, the title track gives way to unexpected senses of groove and melody through most of the meat of the song, and guitarists David Liempi and PTRC duel each other for the spotlight. All things considered, it makes for an interesting sound...The remainder of the album is a testament to old-school death metal, and among the eight tracks, 'With Usura' comes the closest of all to transporting the listener back to that era. Remember the nods to INCANTATION I touched on earlier? This track could have been done by John McEntee & Co. Yes, it’s that good...The only weak point — and it’s a mild one — is that the album does eventually begin to meld together and lose some of its luster. With that said, Istengoat do heavy and evil very well, and most death metal fans will find plenty to dig into here. If you missed out on Atlas Shrugged‘s CD and digital releases last year, now’s a golden chance to grab it on vinyl and amend your past failings as a human" - (NineCircles.com)