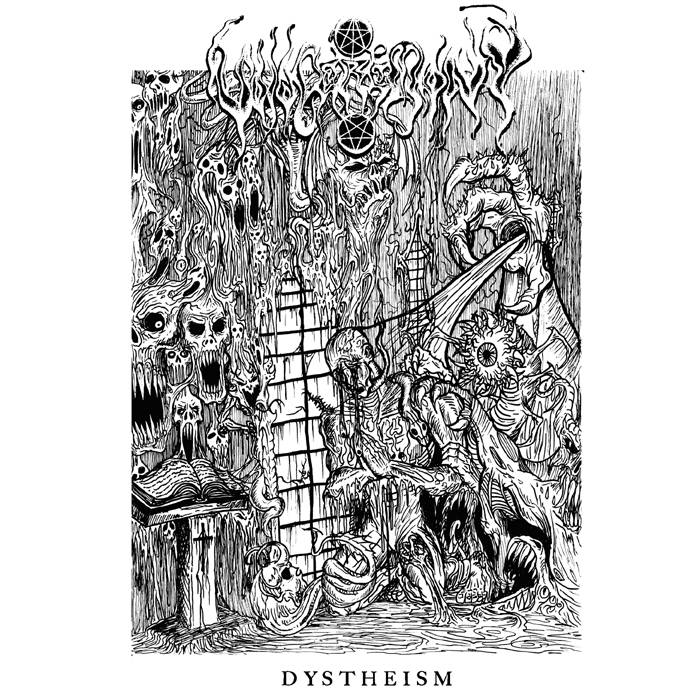 Always on the lookout for the metal underground's most diabolical new sounds, BLOOD HARVEST proudly unleashes VOID CEREMONY's Dystheism on 7" vinyl. Originally self-released last year on cassette, Dystheism is a four-track treatise on dark spiritualism and philosophy, set to the spiraling descent of dizzying, bilious black/death metal. Songs twist and contort in obscene ways, setting the sonic journey into an abyss of bleak realities. Although unapologetically raw, VOID CEREMONY are remarkably clear in their devilish vision, making Dystheism a true "diamond in the rough". (Nathan T. Birk)


"VoidCeremony come with awesome album artwork, an incredibly cool logo, and a sort of experimental mixture of black/death that seems to encapsulate all of this. Especially during the album’s title cut, where all sorts of demonic utterances are heard in the background, almost as if the record was literally a ritual repurposed into that of extreme metal, wherein the fiends themselves had awoken. Ultimately, the listener gets a ferocious mix of death and black that shows especially in the drum work and the slightly off-kilter leads that the band utilize. The vocal approach is, of course, quite welcome in the mixture, as well, and if you’re looking for a technically pleasing yet quite evil atmosphere in the form of extreme metal, then I feel you’ll be most pleased with the effort presented for on this EP. It’s definitely a good sign of things to come, even though it’s awfully short...There’s a lot of cool things to be had here, so I’m definitely looking forward to their next incantation" - (TheGrimTower.com)

"California’s Void Ceremony first self-released Dystheism on cassette last October but are getting it officially re-released from Blood Harvest on 7” this June...The EP features four tracks of twisting and writhing, bilious death metal that shifts from tempo to tempo, avoiding predictability or monotony. The vocals are intentionally rough, and a bit like ASCENDED DEAD’s release, this recording has quite a coarse feel to it and was accurately described on the press release as a 'diamond in the rough'...For a debut, this is more than admirable, with the only negative I have being the acoustic section at the very end could have been a touch longer than the few seconds it lasts; hopefully, future releases from VoidCeremony will see them explore this side a little more. Brilliant debut, and hopefully more to come" - (TheLairOfFilth.com [8/10 rating])

"With a squeal of feedback and a rumble of menacing intent, VoidCeremony introduce themselves to our eager eardrums with their debut EP, Dystheism. Dystheism is the belief that God is not wholly good, and these Californian progressive black metallers can’t find much right with the world if you peer into the chaotic void they conjure up...Like any good black metal, ’Ceremony of the Void’ swirls and churns with all the bleak wailing guitars that you’d expect. Icy fingers claw and scrape at the listener whilst we’re blasted with frenetic picking and crashing cymbals. If anything, it’s only the comparative brevity of the track that stops the desolation feeling all-encompassing...There’s some serious power delivered by the rhythm section on ‘Profane Accumulation of Execrable Reverence,’ as that seismic rumbling continues to be the prevalent method of destruction. Given that there are some neat little progressions, sequences, and drum patterns, it’s mildly frustrating that the sound quality leaves a little to be desired. I appreciate that things shouldn’t be shiny and pretty, but the maelstrom that we’re presented with sometimes pushes the effort required by the listener to the absolute limit...‘Lunar Qliphoth’ gives things a slightly more linear-but-satisfying sendoff, focusing on patterns of blast interspersed with slower grinding. In fact, the riffs during the former are as accessible and catchy and anything you’ll find in extreme music, helped by a degree of groove that gives everything a bit of structure...The overall result is something that feels authentically crude: rough around the edges and spikily imperfect in all the ways it should be. There’s enough talent on display to hint at bigger and better things that will soon be captured with the sophistication it deserves" - (GetYourRockOut.co.uk)

"Appearing in 2014 on cassette, Blood Harvest is releasing this ugly baby on 7” vinyl. The murky world that VoidCeremony reside in is rendered perfectly in the murky production of this fiendish four-track release. The bludgeoning and ruthlessly sharp guitar sound gives the savage riffs the heft they demand, the drums have a bite that is both vicious and viscous, and the monstrous vocals emanate from the void within which this earth-shattering ceremony takes place. As for the tracks (who would dare call them songs!), they are raw and revolting...The opening (sorta) eponymous track crashes in and very quickly shifts the tempo up, simultaneously cranking up the filth and the feces for a sloppy, slavering, and sickening slab of black/death metal. With a structure that shifts before it settles, the band thundering unrestrained through a plethora of feral riffs, ‘Profane Accumulation Of Execrable Reverence’ is harrowing. The title track is ruthless. And so is ‘Lunar Qliphoth.’ VoidCeremony continue to vomit new levels of bile and depravity into both tracks, the beautiful acoustic coda that closes the last track slamming the coffin lid shit on hope, faith, and sunlight. Foul, hostile, and hideous, described as a 'diamond in the rough' in the promo material, this band and this gem are far too dark and unrefined to shine. And all the better for it, too" - (TheMidlandsRocks.com)

"Of course, Dystheism is your traditional rough sounding analog release, which, given the formats it has been made available on, it was to be expected and feels natural to the listener...For what it is, Dystheism stands as a pretty good debut EP as far as the music goes...VoidCeremony are found putting their best foot forward, becoming more impressive the further in you get" - (Apochs.net)