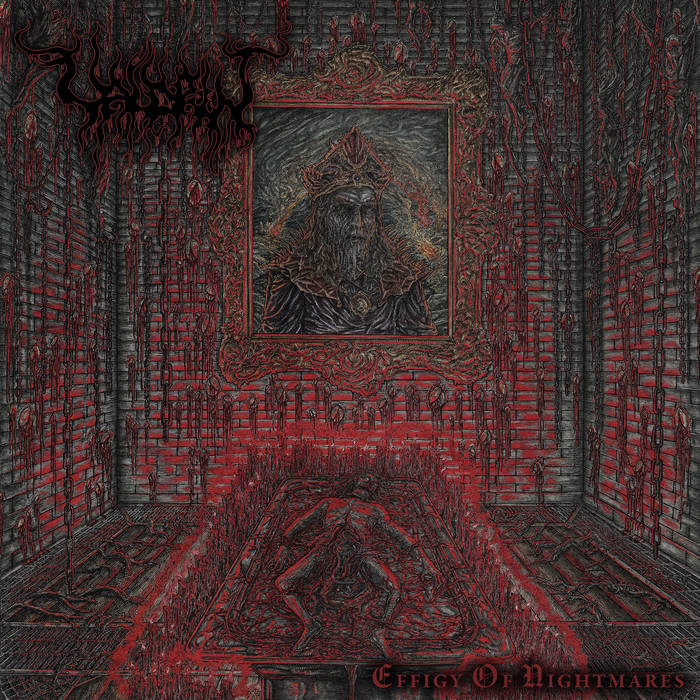 One of the metal underground's best-kept secrets, VALDRIN self-released their debut album, Beyond the Forest, in 2013. A year later, the now-defunct Blast Head Records re-released the album, and between the two editions, the band gained a good amount of momentum. But it was 2018's Two Carrion Talismans, released by new label home BLOOD HARVEST, where VALDRIN reaped widespread acclaim, and for good reason: their epic, shapeshifting blackened death was both timeless and exceptionally fresh, imparting masterful songwriting amidst impassioned playing. The record became something of a mini-classic among those who explored its labyrinthine depths, and its effects are still reverberating today.

However, VALDRIN's forthcoming Effigy of Nightmares is set to eclipse that grand achievement. Taking the rudiments of its no-less-considerable predecessor - endlessly spiraling songwriting, highly memorable and METAL hooks, seamlessly blended synths - and blackening their attack yet further, VALDRIN dive deeply into '90s black metal's most velvety expanses, all nightsky mysticism and fantastical atmosphere. No less muscular, Effigy of Nightmares emits a far greater sense of space and spaciousness, inviting the listener to drown in its deep-purple depths and become possessed by the spectral sorrows lurking within. In fact, it's the album's balance of contrasts - searing aggression vs. atmospheric repose, bewitching melodicism vs. brute force, epic overall construction vs. direct component parts - that puts VALDRIN in even more masterful territory. Along with the quartet's more pronounced usage of acoustic embellishments, the sum effect is altogether not unlike the pivotal works of such '90s giants as Vinterland, Sacramentum, and Sweden's Dawn.

Of course, nothing in VALDRIN is done without serving a greater totality, as founding vocalist/guitarist Carter Hicks explains: "Effigy of Nightmares, like our previous album Two Carrion Talismans, centers around the antagonist of our Mythos: Nex Animus. The story chronicles the tour of a nameless narrator through the halls of Hosptium Mortis, the nightmare hospital below the Orcus underworld itself, where Nex tortures and lobotomizes the dissident gods of his domain."

Continuing, he says, "We as the vessels of the Ausadjur Mythos have chosen this short and concise musical observation of Nex’s supreme power to be the final tale in the Orcus realm. In the future, we will return to the story of Valdrin Ausadjur, and continue after the events of Beyond The Forest."

Indeed, while concise at a swift 'n' sharp 31 minutes, Effigy of Nightmares is no less grandiose - far from it. And while "refinement" is most other bands' hands spells sellout (or worse), VALDRIN here continue their incredibly nuanced and textured approach to craftsmanship, retaining a narrative voice that's still soundly in a class all its own. Awaken, for Effigy of Nightmares is at hand!

Featuring Gary Bartz, 5 years of Rhythm Section Intl and an LP of the week by Nicolas Jaar