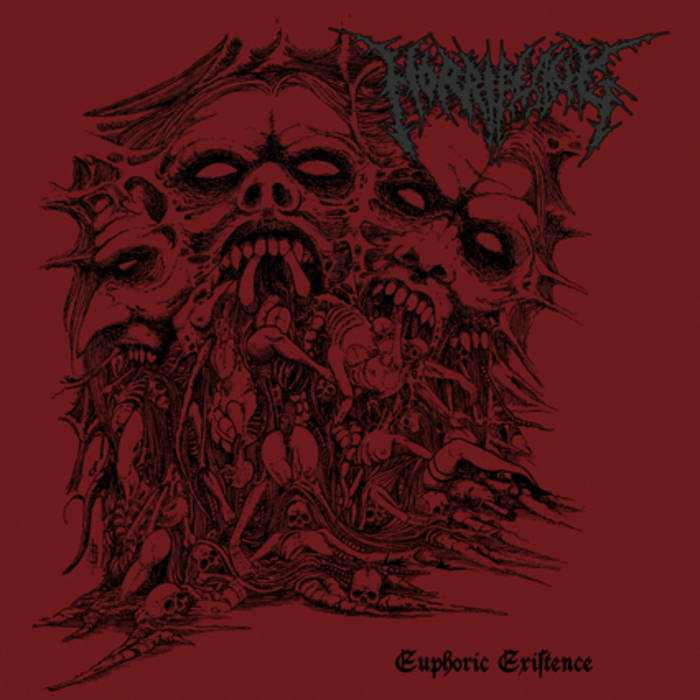 No longer in use

The sickness of HORRIFYING began in 2010, with the mission to create and recapture the old, cryptic sound of petrifying and violent death-thrash. Their 2012 demo caught the attention of BLOOD HARVEST, who immediately signed the band and is now unleashing their vinyl debut, Euphoric Existence, which includes three agonizing and harrowing hymns. Limited to 300 copies on 7" vinyl, HORRIFYING's Euphoric Existence is cruelly/ironically titled: godly Chilean death metal this is, a pleasant and peaceful world this is not!

"This album showed up in my inbox out of nowhere one day by a label I'd yet to hear of; Blood Harvest. Located in Sweden, this label deals with black, thrash and death metal genres and with that being said Horrifying fit the bill perfectly. Horrifying are a (now) four piece band from Chile... and well, little else is known about them; no Facebook or home page exist for them currently and no biography or synopsis was included with my promo bundle. The only thing to go on is that they formed in 2010 and have previously released a two track demo in 2012. Euphoric Existence is the second release from the band and the first to be picked up by a label, what audible experience lies behind the shroud of mystery?

Once you get past the feedback intro and into the muffled blitz of tremolo guitar riffs you may start to set this release to the side and stare at it scornfully with the mindset that it's going to be yet another old school death metal revival album; Satan knows you've had enough of those this year and just one more might be the lump of stinking shit in your stocking that finally makes you go on a murderous rampage. But wait, what's that... a melody? Interesting song composure? Defining vocals? Yes! Now you can feel bad for being such a judgmental jackass. Horrifying have managed to devise an interesting old school experience in just three tracks of low grade unholy glory.

Euphoric Existence is recorded in a suppressed low grade production that gives the content a gritty, raw quality that is reminiscent of early black metal rather than the higher treble primordial death metal releases. The vocals reinforce this idea as they are deranged shrieks of echo-laden madness. During the main majority of the content, the high treble guitars saw their way through the dense atmosphere of each track with diverse, and surprisingly melodic, tremolo riffs. Though that being said, this EP has hints of doom metal along the lines of early Autopsy or Asphyx recordings buried deep in the midst of thrash/black meshes; the title track is by far the best example of the doom nature that the content can easily take on. The drums are a roaring bombardment of distorted cymbal crashes, fuzzy snare whacks and pronounced bass kicks; this is where the thrash part of the material comes into play. The drummer employs the use of blast beats sparingly and always seems to have an array of grim backing rhythms to keep the album interesting through some minor tedious guitar sections. Horrifying even apply creative skills to the content in both the introductory track and during the first bit of "Petrifying Hallucinations" where pedal effects and whammy bars run rampant.

Euphoric Existence is an enraptured death metal release that packs in more creativity, style and personality in its short twelve minutes than a lot of full-length releases have done this year. Horrifying are definitely one band to keep an eye on, as they show a lot of promise and potential very early in their formation. The only recommendation here is to cut back on the tremolos and incorporate more guitar structures. The slower doom grooves are just as impacting as the hot and furious mainframe of the record and will hopefully stick around for future releases. Highly recommended, do not pass this one off as a simple OSDM revival! Available for a mere $4.56 USD over at the Blood Harvest Bandcamp." - Villi Thorne (www.volumesofsin.com)


"As the wheels of ancient, ghastly death metal continue to grind along a highway of human flesh and bones, the chorus of engines is joined by past-obsessed acts the world over. It was largely a European/USA thing at one point, but now Central and South America have chimed in with a good number of acts, some of whom are pretty interesting, others not so much. As for Horrifying, a Chilean act releasing a new, limited 7" EP through Blood Harvest records, one of the most devoted labels of this decrepit old school revivalism, this is more of a stretch into the deep past of death metal. Not a Swedening, not a particularly cavernous sounding affair, but something that recounts the raw roots of the form.

There isn't a damned thing on this small collection of tracks which sounds like it was written post-1992, not a single technique here brings to mind anything remotely modern beyond, say, Onward to Golgotha, and even then they don't utilize the Craig Pillard style gutturals, but more of a mid-ranged, partial hybrid between a bark and a rasp that feels entirely caustic and primitive. But, being this archaic in nature is not necessarily enough to titillate the imagination with delicious nostalgia, the thing needs riffs...and to their credit, while there is nothing even marginally original presented throughout Euphoric Existence, the song-craft on the two longer tracks is varied and at least respectable. For instance, the title track sounds like a rawer interpretation of something circa Scream Bloody Gore but with a more echoed, evil vocal style and a huge breakdown with atonal squeals that would have also felt at home on a pre-1990 death metal prototype, not to mention that it does continue to grow slower into a massive, death/doom lurch that keeps the listener engaged.

The other stronger tune here is "Petrifying Hallucinations" which relies heavily on dark, dense tremolo picked patterns that sound like a mashup of old Death and Incantation, only with some zipping, sinister guitars and that raucous vocal performance. Really loved the totally off the cuff, messy lead sequence embedded there and the surgical thrash/death riffs often coursing through the surge. Can't say I was quite so impressed with the opening, under 2 minute piece ("An Agonic Death") but it had a similar effect to this song. At any rate, the production is pretty steady and consistent throughout the 12 minutes of the 7". Both rhythm and lead guitars are possessed of an unpolished primacy that stirs the guts, but clear enough if you pay attention. The drums are expressive, nasty and loud, with a lot of blasting, storm-like fills but also the ability to break it down to a barebones, sparse rhythm for the second track. It's definitely an invigorating and exciting sound to it, despite the obvious age of the approach, but that's not to say the riffs are all great or interesting.

Regardless, there is an audience for this and I find it hard to believe they'd be disappointed with Euphoric Existence, even if it serves only as a teaser for something more substantial in the future. I've honestly grown a little fatigued with this stuff lately, since not a lot of bands are doing anything different or bringing much of a unique identity to the style, and there are just so many new bands emerging into it. But Horrifying is without question a competent newcomer. I found that they were adept at capturing their intended atmosphere, and keeping the songs punishing and morbid, even if it wasn't quite as memorable as the stuff groups like Horrendous and Morbus Chron have been releasing. Raw, unruly and determined, but there still might be a distance to go in the songwriting." - Autothrall (www.fromthedustreturned.com)