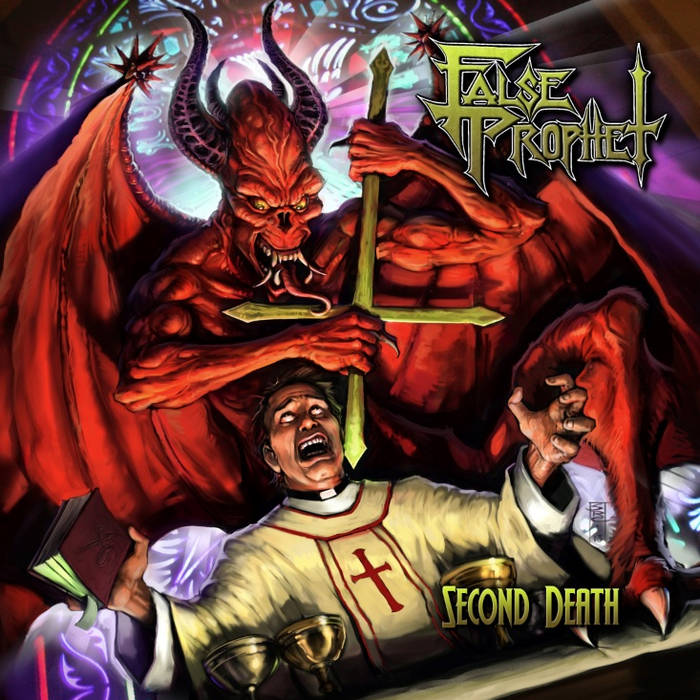 Chaos Storm Feeling nostalgic here. I bought the cassette back in (I think it was) '94 through Rage Records. At the time I was ate up with death metal and black metal and wasn't really into thrashy stuff, but I did like this. I remember hearing the band changing their name, and then just disappearing. Glad I bought this. Sounds as good as I remembered it. Favorite track: Second Death.

False Prophet was formed in the then musical barren wasteland known as Greensboro, NC. as a three piece by Paul Ray, Chris Lyndon and Tim Haisman under the moniker Abattoir, they were soon to be joined by Mike Morrison, and began their musical quest to create their brand of brutal assaulting metal. Taking their musical influences, from mid-80's thrash from the west coast like Exodus and Dark Angel, death metal pioneers such as Venom and Possessed, the metal/hardcore ideals of bands from the east coast like Overkill, and the more melodically heavy music from Europe, and created a sound that was both aggressive and technical.

After recording an early demo entitled "Sign of the Cross" released in 1989, False Prophet starting garnering local and international attention, landing them opening slots for Danzig, Dark Angel, Forbidden, Death Angel, Confessor and Demolition Hammer, among others.
In 1991 False Prophet would self-release the album "The Second Death". Around this time, original drummer Haisman would live the band and be replaced by Raymond Martin. The band received great reviews and had numerous interviews with underground fanzines and metal magazines alike.
Around 1992 the band changed their name Infernal Hierarchy. With the new name change, the band once again returned to the studio to record a two song demo, which would later be released on 7" by Rage Records in 1993. Once again, these songs showed the growing musicianship and songwriting that the constant practice and shows were helping the band to achieve. After much success with this release, the band decided to disband this incarnation due to personal circumstances.
Forward to the year 2013, and once again the name False Prophet is beginning to create rumblings in the underground music community. With the new found freedom of the internet, the band was approached by Heaven and Hell Records about re-releasing all of their previous material. Enlisting Jamie King, producer of bands such as Between the Buried and Me, to remaster all of the old recordings, and the results are spectacular, resulting in the release of "The Second Death" with new packaging, both on CD with Heaven and Hell Records and on full-length double vinyl set through Blood Harvest Records.

In further related news the band has begun rehearsing to bring an updated version to the live stage, and is in the process of getting the merchandising machine rolling again. Keep your ears open for more great things to happen. Ail Hail the coming of "The Second Death". ..again