Servitude Of The Impurity 7"EP 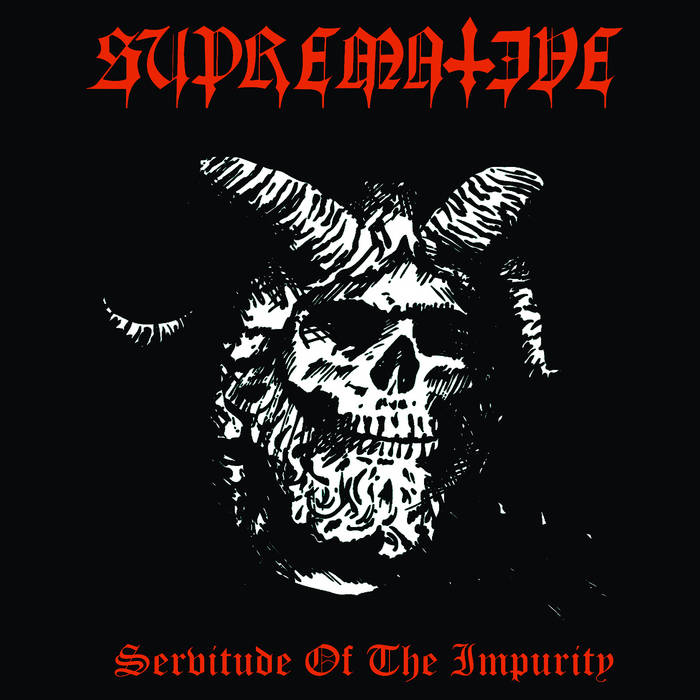 "This one was originally dropped in 2013 as a demo cassette. Servitude of the Impurity saw immediate acclaim across message-boards and was very quickly hard to find (and for good reason). Luckily, Blood Harvest teamed up with Supremative to release the demo via the vinyl format. This is an absolute gem...Supremative play fantastic blackened death metal. Hailing from Spain, they draw comparisons to fellow countrymen PROCLAMATION but tend to be more in line with the BLASPHEMY/BESTIAL WARLUST/SARCÓFAGO crowd. The tracks are unrelenting discourses on pure metal filth. A definite winner that the world is fortunate to see being re-released" - (Ninecircles.co)


"It’s true that Supremative sounds like defunct bestial/black/death metallers PROCLAMATION, but the duo from Spain don’t blindly go a hundred miles an hour on their forthcoming EP, Servitude of the Impurity. The production may be just as raw, but Supremative make an effort to vary the song structure a bit. There’s plenty of blast sections, but Supremative drummer Instigator of the Seven Demons… aptly lays the drumkit to waste with plenty of fill-ins. The riffs sometimes slow down for a mid-tempo mosh section, before the band begins to build speed, up until the blastbeats resume their course, sending the band divebomb soloing, playing a fitting soundtrack to the extinction of man. Bestial black deathers will love Supremative’s forthcoming vinyl release care of Blood Harvest Records...Even the cover art hints strongly at the PROCLAMATION influence. War metallers BLASPHEMY may be more intense, but Supremative’s songwriting nuance creates a more listener-friendly sound. BLASPHEMY still utilizes a style fitting for end-to-end blasting, but Supremative are more willing to occasionally vary the tempos. Should you have a bestial black death metal addiction, Supremative’s Servitude of the Impurity is a better offering than most of the subgenre’s tributary practitioners...Bands of this type don’t come out of the woodwork often. Mostly, bands like MORBOSIDAD and TEITANBLOOD are revered highly for staying true to their sound. Incorporating very active drumming with grindcore chugging breakdowns, Supremative seems aware that war metal and bestial black death metal must diverge from the beaten path of BLACK WITCHERY/PROCLAMATION-influenced purveyors...In order to achieve that, they use the mid-tempo mosh sections to add songwriting nuance. They also vary the faster tempos, sometimes going fast, then faster, until they play at full-throttle. The variations from the subgenre template on Servitude of the Impurity are subtle but noticeable enough. Perhaps not deliberately injected into their songwriting style to diverge from the subgenre norm, they simply reinterpret the template with subtle modifications that come instinctually...Perhaps, it is true that PROCLAMATION ran its course after featuring little else but end-to-end blasting. Suppose BLASPHEMY are guilty of utilizing the same scheme. Bands like TEITANBLOOD still incorporate most of the subgenre’s typical traits while showing a willingness to occasionally slow down for the sake of listenability. With production suitably raw, the drums on Servitude of the Impurity weren’t muted to the point of purposelessness, rendering only the cymbal crashes audible in the recording. Instead, Supremative uses the drums as a weapon, with the production capturing it with enough fidelity to make the drumming performance an effective contribution to Supremative’s sound...For bestial black death metal fans the world over, Supremative’s Servitude of the Impurity is a must-have for a budding collection...For fans of VOMITCHAPEL and TEITANBLOOD, Supremative is as promising as they come" - (EchoesAndDust.com)


"Spain has produced some of the filthiest and unrelenting black/death metal in recent memory, with bands like TEITANBLOOD and PROCLAMATION destroying everything in their path. You can now add Supremative to that list, and while this particular band is fairly newer in comparison to those acts, they’re already just as destructive and bleak. Their debut demo, Servitude of the Impurity, came out on cassette and CD back in 2013, but both were in limited pressings and have become fairly hard to find. So, Blood Harvest Records is giving it the vinyl treatment...Servitude of the Impurity was written and recorded when the band was a duo, though these days, it’s down to founding member Instigator of the Seven Demons and Inexorable Necromancer (who also is behind NECROVEN). Following a short intro that has soft chanting, Supremative launches into their bottom-heavy attack with a massive wall of sound and doesn’t let up until the demo has come to an end. There are obvious nods to ARCHGOAT and BEHERIT in these songs, with an emphasis on warlike instrumentation that pounds away at the listener with precision and tonality that makes it feel like it’s going to leave you caked in black sewage. It’s absolutely immense, and even though this is the band’s first demo, the sound quality is far better than one might expect. While the guitar, bass, and drums unleash their onslaught, the vocal work towers over them with an extremely distorted low-pitched scream/growl that sounds like it’s directly coming from the depth of Hell. Every single word is drenched in filth and reverb, and the vocals often threaten to drown the listener...It’s rare to find a black/death metal band that already sounds this fully formed on their first demo, as so many of them are loosely played jumbles of noise that come off as amateurish. But Supremative is the real deal, and if you like what you hear, you’re going to want to grab this new vinyl pressing of Servitude of the Impurity and crank that sucker up until your neighbors can feel the hellish attack" - (TOMetal.com)