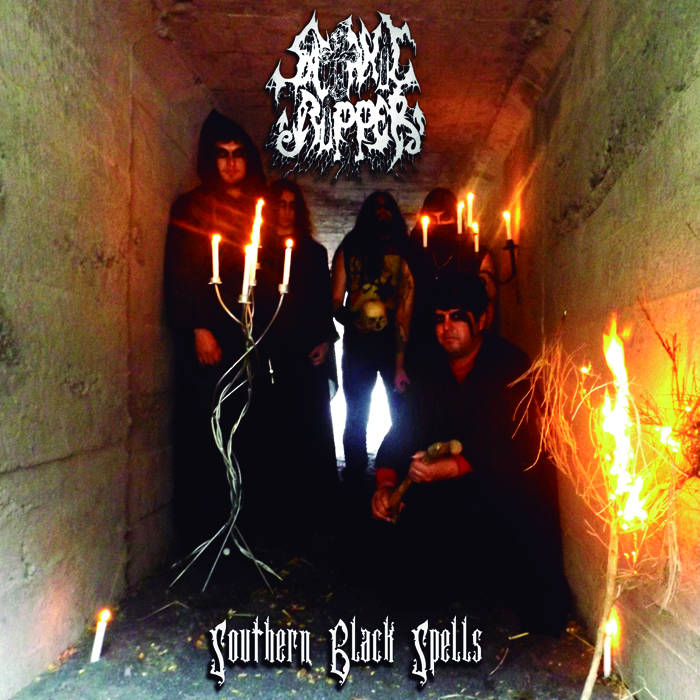 BLOOD HARVEST RECORDS is proud to present a special vinyl LP pressing of SATANIC RIPPER's debut album, Southern Black Spells. Originally released on CD last year, Southern Black Spells introduced these Chilean maniacs to the international metal scene with a billowing black cloud stinking of sin and sulfur. SATANIC RIPPER refer to their blackthrashing attack as "Evil Grave Metal," and truly, it's an accurate demi-tag: neither too traditionally black metal nor exclusively thrash-minded, the quintet forge a scrappy, salacious, and yet strangely addicting sound that's got grit and atmosphere to spare, as well as devilishly good songwriting and utterly possessed performances. Cast Southern Black Spells and be under the command of SATANIC RIPPER! (Nathan T. Birk)

"Seeing a vinyl release this year (CD came out last year), Satanic Ripper’s Southern Black Spells debut is, in fact, a ripper. Razor-sharp blackthrash anthems of hatred and disgust for the bearded hustler, this one is a dirty throwback to the age of olde. They rip into ‘The Flight Of The Witch’ form the start and don’t let up for six minutes. The bulldoze bass-break and descending coda that follows gives this a bit of room to breathe. The arpeggio in the end is especially glum (it reminds me of a NECROPHAGIA riff, but don’t think I’m comparing these guys to NECROPHAGIA) before they launch into the battering ram of death that is ‘Sexual Schizophrenia.’ If you’ve been privy to anything Brazil, Chile, Peru, etc, have offered in the wretched blackthrash genre, you know damn well what this sounds like. At 11 songs and 45 minutes, it’s a little bloated, but nonetheless relentless and disgusting, chock full of face-shredding riffs and occult-chanted madness. Don’t let the middle-school name fool you - this one’s a banger" - (Zero Tolerance [4/6 rating])

"Ripping for Satan one song at a time, these speed-dealers from Chile have created an engaging album—staying raw but not too much in the lo-fi realm—with songwriting that holds even the most fair-weather listener’s attention. Southern Black Spells is not a new album—it was released on CD last year, but Blood Harvest has given the album some new life and attention with their vinyl release of the album. Speed is the prevailing factor on the record, but there’s little bits of death, black, and thick atmosphere. There are some huge successes as a metal album here—the production maintains this feeling and also bolsters a pleasant way of changing guitar tones and other key sounds. This constantly changes the feeling of the record. Also, amid the howling screams, the band employs some haunting, sung-type vocals. It’s a rare but great treat to get a record filled with good songwriting—lots of different sounds and an aggressive, yet haunting atmosphere" - (SLUG)

"More goofy/earnest metal, undoubtedly devoted to the great SARCOFAGO. I really enjoy their self-declared genre title of 'Evil Grave Metal' – enough to where I changed their ID3 tags in my media player to reflect as such" - (InvisibleOranges.com)

"A church organ, a demonic gurgle, and then a Chilean blend of black, death, and thrash metal – or 'Evil Grave Metal,' as the band would have it – courtesy of Satanic Ripper spills forth. Filthy and furious, violent and vile, the opening track alone bleeds hatred and scorn. Where ‘Sexual Schizophrenia’ is as twisted as its title, the ludicrous speed riffs, maniacal lead work, and frenzied drumming as insanely vicious as the vocal, ‘Blood Magick’ drags the tempo down partway through to add a more ceremonial feel to proceedings. And after that, well, Southern Black Spells continues to draw deep from the darkness to create a densely atmospheric and coarsely textured piece of work...Ragged, raging, and ripped to bits, originally released in March 2014 and to be released through Blood Harvest on vinyl, with distorted guitars and bass lines that fart like Beelzebub with the bellyache and unremitting drum lines in their armoury, Satanic Ripper sit well amongst their Chilean counterparts who worship the old and defy the new. Evil, chaotic, unrestrained and majestic, there may be very little new or different to the album, but the execution is a cut above. A more-than-worthy addition to the collection" - (TheMidlandsRocks.com)

"Chile gives us this act, whose self-invented personal genre is something called 'Evil Grave Metal.' Really, it’s plain old South American blackened thrash, better recorded than early SARCOFAGO or MYSTIFIER, but closer to those bands than early SEPULTURA or VULCANO...I love the South American scene for precisely this level of aggressive, old-school underground thrashiness, and this one’s a bit better played and recorded than most similar releases I’ve been exposed to recently, occasionally approaching the production level of, say, BELPHEGOR (if you can believe that in a Chilean blackened thrash release!)...Raise the horns in salute" - (Third Eye Cinema webzine)

"Anyone for some South American ‘Evil Grave Metal’? Well that’s how Chile’s Satanic Ripper describe their infernal racket anyway. Southern Black Spells is the band’s debut album from last year, which receives a special vinyl release this month via Blood Harvest...With the album’s cover depicting a band adorned in cloaks and corpsepaint, with candles, skulls, and bones, and with song titles like ‘Chalice, Altar, Spell’ ‘Insane Satanic Screams,’ and ‘Walking With Evil Spirits,’ this is evil shit, South American-style. The 11 tracks on offer don’t offer too much in variety; this is pretty much full-pelt black metal with some thrash and death thrown in from start to finish, with some distinctly evil growling in the vocal department courtesy of vocalist Unholy (the other band members are Old Ripper, Desectrator, and Horrorhammer, by the way). The slightly less-than-warp-speed ‘Open The Grave’ is a highlight, with some eerie sound effects bringing Venom’s ‘Buried Alive’ to mind, and at just under the eight-minute mark, the album opens with an explosive epic in the shape of ‘The Flight Of The Witch,’ another highlight...The production here is basic but good enough, and the subject matter covers the usual territories of occultism, anti-Christianity, black magic, and evil in general. Although Satanic Ripper don’t offer anything particularly new, Southern Black Spells is a totally evil, disgusting, and, yes, fun listen for all fans of evil grave metal the world over" - (UberRock.co.uk)

"Blackthrashing bedlam that lives up to the band’s name. The music whips like a tornado around your head, driven by chaotic riff-swarms and drumming that lives in the red zone...In a nutshell, this is an excellent, dynamic piece of filth (I forgot to mention that the vocals are rancid enough to curdle milk)" - (NoCleanSinging.com)