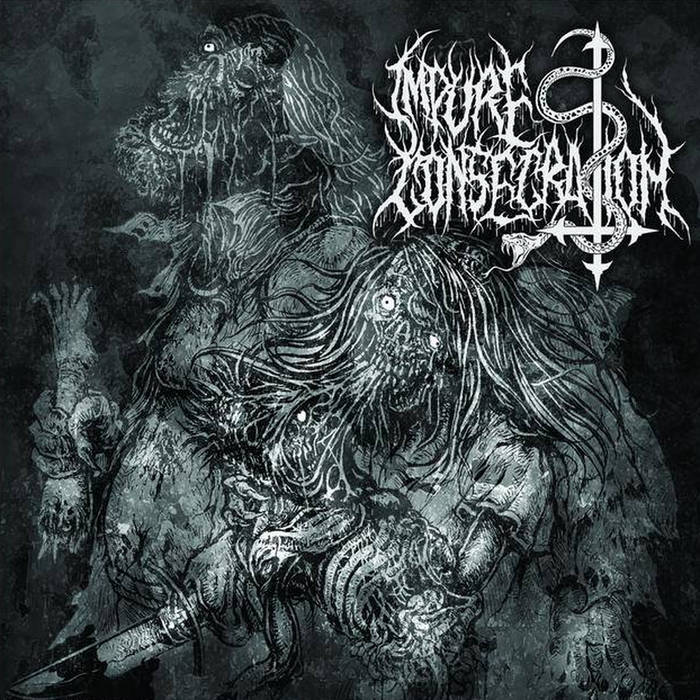 BLOOD HARVEST RECORDS is proud to present IMPURE CONSECRATION's vinyl debut, Succumb to Impurity Fire, on 7" EP format. A power trio hailing from the United States, IMPURE CONSCECRATION play occult death metal that's firmly rooted in ancient traditions whilst remaining wholly modern. References to be made are classic Morbid Angel, The Chasm, Vital Remains, and Angelcorpse, but this early on in their career, IMPURE CONSCECRATION brim with a confidence of craft that belies their young age as a band. Very aptly titled, Succumb to Impurity Fire comprises two tracks of throttling, twisting Metal of Death majesty, and also serves as a delicious teaser for the band's forthcoming debut album for BLOOD HARVEST. Strictly limited to 250 copies, you'd better Succumb to Impurity Fire ASAP! - (Nathan T.Birk)

"Here we have a short blast of ancient, occult death metal that reeks of the old school and decayed corpses...With a playing time of less than 10 minutes, the band waste no time in getting down to business. These songs are moldy examples of the atavistic art of death metal, played with the fervor of fanatics and the skill of veterans...The music is well-written and knows what it’s doing. Blastbeats and solos are used to add texture to the mid-paced assault, and the band craft their riffs with the care and attention of people who have been doing this for a long time, even though this is still a relatively new band...The vocals are closer in delivery to black metal than death metal, with sickened rasps seemingly buried in the framework of the distorted guitars, lashing out with impunity...Both tracks have productions that sound decades older than when they were actually laid down, but out of the two, the second track ('Apparitions of a Malevolent Spirit') sounds even more ancient and forgotten than the first, seemingly recorded in a dark, dank cellar somewhere. Both tracks are actually enhanced by this, though, to be honest, and I like the rotting sound that the band has...A convincing display of morbid worship and crushing death metal know-how. It’s easy to get wrapped up in the grim atmospheres of this short EP. Check this out" - (Wonderbox Metal webzine)


"This was a shocking discovery. Killer cover art, two great songs, and a band that, even at this young an age, draws comparisons to fellow Americans MORBID ANGEL...The first track features better production and more of a straightforward death metal feel. The second track features a more raw production, making 'Apparitions of a Malevolent Spirit' feel a bit more like a blackened death metal track. Definitely a bit of a banger here, particularly the first track. Recommended for those who enjoy THE CHASM, VITAL REMAINS, and ANGELCORPSE and collecting vinyl" - (NineCircles.co)


"A vast majority of death metal in the United States pales in comparison to the greats who started the genre. Floridian death metal as a scene continues to be influential. Death metal styles on foreign soil remain as vital as the Tampa terrors once were, with Sweden and Finland being instrumental in the diversity and survival of the subgenre, even as modern melodic death metal has succeeded many of the greats from the two aforementioned countries. From California comes a cross-breed of old ANGELCORPSE and early MORBID ANGEL: a band called Impure Consecration, and their latest release, an EP called Succumb to Impurity Fire, comes to us via death metal-specializing label Blood Harvest Records. Curious as you might be, pay heed to death metal mediocrity no more...Impure Consecration is waiting restlessly to unleash a full-length release, as the young band has but an EP, a split, and a demo to its credit. Impure Consecration loves early ANGELCORPSE freneticism, along with MORBID ANGEL-style riffs and wailing divebomb leads. There are only two tracks in this EP to showcase their obvious abilities. The first track, the title track, is resplendent with fill-ins and chugging guitar riffs. They don’t play chugging riffs ALL THAT REMAINS style, so don’t click that 'back' button after reading this. Theirs is a simple but old-fashioned guitar-playing style that early death metal bands were more keen on playing. This isn’t modern death metal ala LAMB OF GOD either. This is ancient, warped coffin bone and nitre from the days when death metal was raw, ugly, and devoid of the sort of death metal wankery and melody that seems to have overrun the scene as of late. Impure Consecration hearken back to tape-trading days when a lousy two tracks were momentous in the spirit of the music, and two lousy tracks were two glorious examples of filthy brilliance...The first track on the EP is a studio track, while the next track and EP closer entitled ‘Apparitions of a Malevolent Spirit,’ a track that is raw and dark, could have been captured live, or recorded on a four-track. The first track has drumming on a proverbial high, sending fill-in after fill-in to destroy the walls of the temple the way biblical character Samson does by pushing the pillars that comprise the temple’s source of support. The next track features more blastbeats, burgeoning double-bass kicking, and shredding riffs. Either way, this is an OSDM-lover’s wet dream" - (EchoesAndDust.com)


"Death metal that has a hellish, occult sound to it, and they’ve released quite a bit of material in a short period of time. Succumb to Impurity Fire follows a 2015 demo as well as a split and EP that already came out earlier in the year, and presents listeners with two new songs of monumental proportions...For a band that just started to put out recorded material last year, Impure Consecration gives off the impression that they’re a bit more fully formed and have a clear vision of where they wish to head with their death metal. The title track kicks things off with warlike drumming and a commanding guitar lead that expands outwards to create murky layers. With the tempo sticking towards the slow side, the guitars weave around this heavier base in a way that gives off an occult, otherworldly feel, and things only speed up at key moments to bludgeon you into the ground. The production values offer a considerable amount of clarity without sacrificing rawness, as the instrumentals sound razor-sharp, but it’s easy to hear what each one is doing. The B-side, 'Apparations of a Malevolent Spirit,' ups the rawness even further, and it actually sounds like these songs were mixed fairly differently. It’s a bit more compressed by comparison, with the guitar and bass struggling to break free of the relentless drumming, but this direction works perfectly for the fast-paced attack Impure Consecration has to offer. While the instrumentals pummel away, A. Carillo delivers a raspy scream that hangs over the recording with a mysterious, ominous feel. It’s a combination that stands out, and while the brevity of this EP will leave you wanting more, it’s a perfect tie-in for the band’s upcoming full-length, which will be out sometime in the near future...Anyone with an interest in death metal that skews towards an occult, mysterious sound will want to check out Impure Consecration, and you’ll want to act fast, as this pressing is limited to 250 copies" - (TOMetal.com)