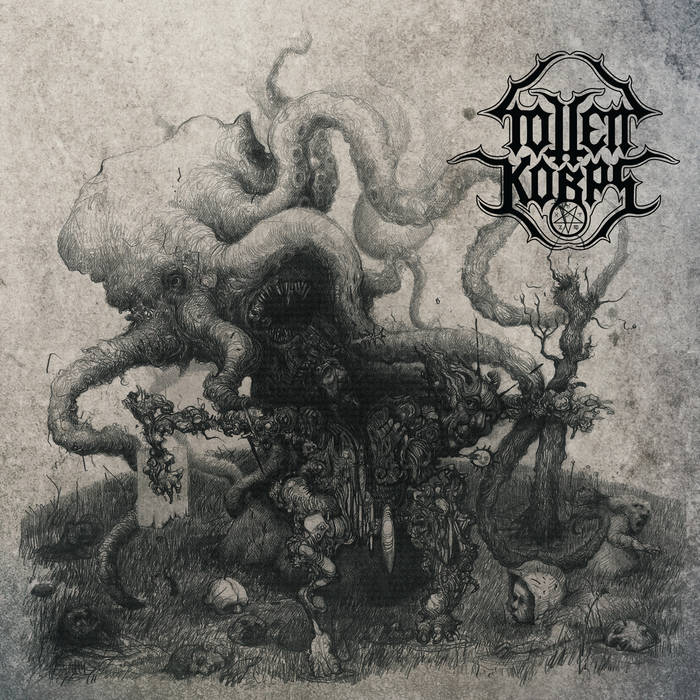 BLOOD HARVEST RECORDS is proud to present TOTTEN KORPS' second album, Supreme Commanders of Darkness, on vinyl LP format. Founded in 1989 in Santiago, Chile, TOTTEN KORPS is one of the extreme metal pioneers of the nation, as well as being an influence to the current generation of Chilean death metal bands. The band was born amidst the chaos arising from the military dictatorship ruling the country at the time - a scenario that fueled the goal of recording their first demo, 1990's The King of Hell Reclaims His Throne, and subsequently their second demo, 1992's From the Infernal Resurrection. In 1993, the band signed their first record deal with Hellion Records from Brazil, thus managing to cross the Chilean borders to disseminate their somber death metal throughout the globe. In 2001, TOTTEN KORPS at last released their debut album, Tharnheim: Athi-Land-Nhi; Ciclopean Crypts of Citadels, on the cult Repulse Records. During a dry period for true death metal, this first full-length proved to be a dark gem, and is now held as a mini-classic with many.

Never one for half measures, always patiently taking their time, TOTTEN KORPS would stay quiet for the rest of the decade whilst working on new material, but at long last arrives their highly anticipated second album, Supreme Commanders of Darkness. Released in South America on CD at the end of last year, Supreme Commanders of Darkness proves that time has not dulled TOTTEN KORPS' fire; if anything, the quartet's more incensed than ever. And just like they've never been away, like 14 years haven't actually passed since their last recording, TOTTEN KORPS explode with all the wild, winding fury that made their early work so cherished. And yet, despite the immediate conflagration at hand, there's a pronounced technical aspect at play across the album, ably rendering their apocalyptic terror all the more mind-bending and -mangling and preserving their old-school roots all the while. Bow before the Supreme Commanders of Darkness! - (Nathan T. Birk)