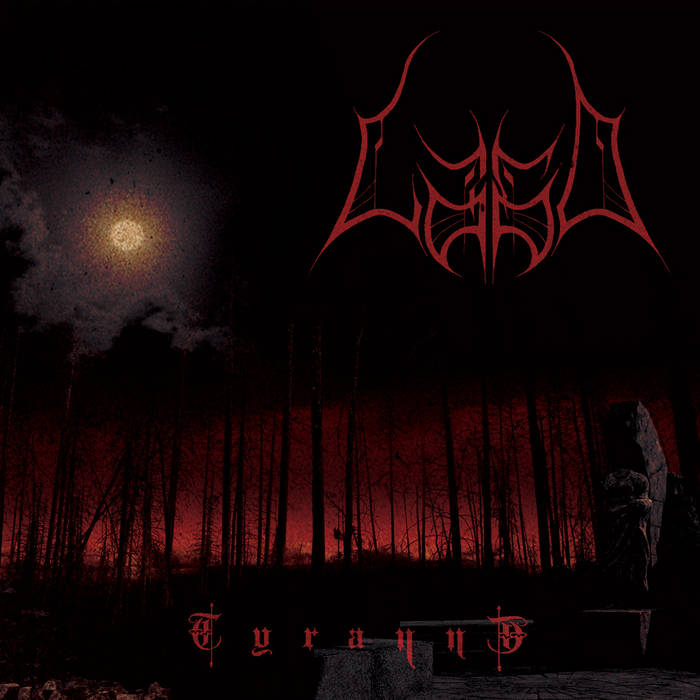 BLOOD HARVEST RECORDS is proud to present LAGO's debut album, Tyranny, on vinyl LP. Originally released last year in limited quantities on CD, BLOOD HARVEST immediately saw the potential in LAGO's fiery 'n' fresh take on timeless death metal songwriting. Across Tyranny, you'll hear shreds of LAGO's cited influences - Morbid Angel, Decapitated, Emperor, and Aeon - as well as much the eternal Floridian death metal sound and the labyrinthine epics of later Vital Remains. However, with the poise and composure of veritable veterans, the American quartet take a compositional approach that's classic and even classy: narrative guitar leads rise and rise, rhythmic shifts spiral around in interesting angles, and explosions of violence are meted out methodically. Indeed, Tyranny is aptly titled, for LAGO are on their way to becoming merciless leaders in the death metal underground.

Founded in January 2010 in Phoenix, Arizona, LAGO was begun by vocalist/guitarist Cole Jacobsen, drummer Shawn Reiterman, and lead guitarist Manuel Dominguez. Upon completing the lineup with bassist and backing vocalist Garrett Thomas, the band released their first EP, Marianas, on Pale Horse Records to critical acclaim in November 2010. Changes to the lineup occurred throughout 2011 and early 2012, beginning with the departure of Manuel Dominguez. After a brief search for a replacement member, the band recruited Andrew Breshears, also drummer for fellow Phoenix band Depraved Heretic, into the fold. Upon Shawn Reiterman leaving the group, LAGO briefly brought in Six Million Dead skinsman Helbert Trejo, and once he departed, the band welcomed Brian Miller, formerly of Deadspawn, into the family.

"Many debut albums, especially in extreme metal, begin with a big blast, a declaration of a band's commitment to power and intensity. This album does not do that. Instead, things open with a slow-building crescendo, one that builds over about 15 seconds before achieving its full effect. I don't know how deliberate this was, but I found it rather striking, especially for the first track on a debut release. Instead of demanding my attention with an onslaught of sound, the low volume forced me to make sure that I was really listening. And I was. In fact, I'm still listening now...If the opening crescendo bothers you, let it go. Even though the volume is low, things start out just as heavy and extreme as they're supposed to. In fact, fans of death metal, especially of its uncompromising commitment to heavy bounds of rhythm and intensity, should definitely check out this album. The music fits squarely within the recognized strengths of bands like AEON, DECAPITATED, EMPEROR, and MORBID ANGEL, but it also never lags into a mere amalgam of influences. Having seen AEON recently, I can definitely picture Lago sharing the stage with those guys. Better still, these guys are writing high-quality songs, the kind that more mature bands write...The opening track, entitled 'I,' certainly asserts the band's presence just as effectively as that pronoun does. A statement of existence, 'I' asserts individuality. As good as the opening was, though, I loved this album's last two tracks, 'Reckoning' and 'Pox of the Weary.' To my ears, those tracks took all of Lago's strengths as songwriters and put them on display. The latter is especially interesting since it suddenly stops everything and introduces a violin solo, probably a lament on the state of humankind. It's a shining moment on this release, one that I won't soon forget...I also want to highlight the role the guitars take in the music on this album. The band's promo materials use the term 'narrative' to describe what the guitars are doing. That's not the word I would have chosen, but it'll do. Nevertheless, I think I understand the point behind thinking in terms of narrative. There are moments when the guitars rise above the heavy back end and sing out with a brightness and quality all their own. That could represent a narrative of some sort. It could also represent a guide, one who takes us through the chugging and the chaos toward temporary safety. I don't want to put too much emphasis on the guitars, but I think listeners will agree that they definitely stand out as highlights on this album. I don't want anyone to think I've blown off the other musicians—they are no less intense and no less technically proficient. This is a solid debut" - (Seaoftranquility.org [4/5 rating])

"Five years in and Lago’s debut album has arrived and it is solid. Like MORBID ANGEL, ORIGIN, and IMMOLATION, toeing the line between technicality and brutality, Lago are perched on the right side of heavy churning out some seriously good death metal. The production potent, the riffs caustic and catchy, the drums cannon-like, and the vocals guttural and torn, there isn’t a bad track on Tyranny...Compositionally, Lago have nailed it. Each track refined, they know when to trade the trem-picked melodic riffs for heavily demented chords and when to lean in with the violence and when to dig in to a grinding groove. The varying approach to the vocals works very well, providing enough diversity in their sound not just to maintain interest – a gimmick so many fall foul of – but to give the tracks character, depth, a voice of their own. Combine this with the excellent lead work and clean-yet-heavy production and you’ve got a death metal album well worth blasting the crap out of" - (TheMidlandsRocks.com [8/10 rating])

"This Arizona four-piece deliver brutal death metal from an older, American perspective on their Tyranny album. DECAPITATED, MORBID ANGEL, and SUFFOCATION do factor in to a lot of the frantic riffs, high-end guitar transitions, and deep guttural bellows for 'I,' the hive swarm 'Concede to Oblivion,' as well as dramatic 6:54 closer 'Pox of the Weary.' Lago excel at varying speeds, often being just as aggressive and tuneful at controlled pacing as they are when the accelerator pushes full throttle...Sometimes, you just need to hear passionate, underground-oriented death metal without the excessive intricacy or technicality that some of the new generation chooses to inject into the proceedings. The production allows you to handle the double-bass and snare hits without thinking things are excessively triggered, while the guitar team of Manuel Dominguez and Cole Jacobsen provide sledgehammer impact. Fluid leads make many of the arrangements slightly more melodic, before the next flurry of riffs and kicks careen across the temple. You have to love the dark red and black hues on the cover art, as well as the logo that is slightly illegible, another hallmark for the death scene...Eight songs in 40 minutes never burdens the body, making return trips to Tyranny easy and pleasurable. I'd imagine Lago unfurl quite the pit action during their live shows, and I, for one, look forward to where the follow-up will take us. Let the brutality soothe your troubling, stress-filled days away" - (Eternal-Terror.com [4.5/6 rating])

"An absolute beast of an album. It comes racing out of your speakers at an almighty pace and never lets up. The sound is a partially melodic, partially technical death metal/thrash, with great guttural vocals. The album is played with precision, skill, and passion, especially the lead guitar, which really adds to the atmosphere of the album. Harmonic leads and riffs that make you want to bang your head are what's served up, and this is one platter of death metal that will definitely leave you feeling satisfied" - (WallsOfTheCoffin.com)

"The forefront of the metal industry — and industry means a group of rent-seekers supporting each other in quasi-collusion to do roughly the same stuff so the profit can keep flowing and costs can continue to be externalized through enforcement of mutual interest — consists these days of bands like ARA and Lago who are trying to hybridize deathgrind in the Unique Leader style with the metalcore/progressive metal that has been floating around for several years after rising from its archetype in the late years of punk, when 'progressive' pop-punk bands wrote longer songs based on high contrast between riffs to the point of incoherence, as if trying to emulate BLACK FLAG's The Process of Weeding Out without the heavy thematic load that album carried. This made sense for punk since when a genre has expressed its core ideas, no more can be done with them but to convert them to technique and to add complexity to hide the basic archetypes that would be revealed by simplicity (bands, after all, have to make product or they fail, both economically and in the economics of social prestige, where the members want to be known as the guys from that hip avant-garde whatever from wherever for the rest of their lives as industry insiders or hipsters working at local bookstores). The consequence of the deathgrind/metalcore hybrid is that bands incorporate the jazz/progressive/shredder stylings (equal parts KENNY G, DREAM THEATER, and JOE SATRIANI) into more pummeling material that tries to unite itself in the way older death metal did, or at least to the level that GORGUTS' Obscura aspired to. This tames the most random and hopeless aspects of progressive punk and metalcore, but can end up emphasizing the trivial aspects of death metal instead of its ability to knit together riffs and song structures to create journeys of discovery that were equal parts psychedelia and H.P. Lovecraft-styled exploration of the morbid, realist subconscious. Lago demonstrates an ability to make competent Unique Leader-styled deathgrind, complete with pig squeal vocals and constant high-intensity double bass, but to work into it both the more harmonically advanced riffs and instrumental interludes that the newer progressive variants feature. The result alternates between riffs so simple in conception that they make bricks bash their heads against walls, and instrumentals much more like progressive rock than metal...Lago is among the best of the breed...these songs come together better than just about anything else in the subgenre, and make Lago a band worth watching for the future" - (DeathMetal.org)